On Saturday mornings, my family would gather around and watch as Looney Tunes villains targeted our favorite characters with anchors and bombs and laugh as Bugs Bunny and friends would retaliate with none other than…banana peels. Although the banana seems less dangerous than your everyday anchor, the slippery peel would turn the characters upside down and flat on their backs.

This theatrical yet serious act was not invented by the Looney Tunes characters though. Rather, the origin of the dangerous banana began in the early 1900s when the popular fruit peel would be left on the ground to rot and create a slimy, slippery hazard, according to the Myth Busters on Discovery. END_OF_DOCUMENT_TOKEN_TO_BE_REPLACED It’s that time of year again where the leaves are gone, nights are long, and the cold, winter chill is upon us. While Mississippi can’t complain too much about the frightful winter weather, the weather has increasingly become hazardous for the entire country.

It is hard to forget the frigid winter that we had last year. The polar vortex struck Desoto County and the north and south both faced troubles. States on the northern border like New York, Connecticut, Minnesota and Ohio had lots of snow and below freezing wind chills, while the southern states like Georgia, Tennessee, and Mississippi learned how to deal with ice, and winter traffic delays. END_OF_DOCUMENT_TOKEN_TO_BE_REPLACED 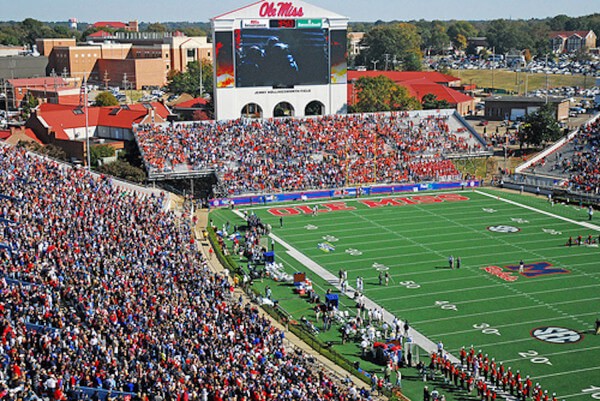 The Stroud Law Firm is giving away one set of Ole Miss football tickets, for the home game on September 27th.  Ole Miss will play the Memphis Tigers, one of their biggest rivals, and this game is one that college football fans don’t want to miss. END_OF_DOCUMENT_TOKEN_TO_BE_REPLACED One of our own exceptional lawyers, Philip Stroud, was selected as a Top 100 Trial Lawyer by the National Trial Lawyers.

The National Trial Lawyers is a professional organization that focuses on life-long advocacy training, educational programming, and networking. The organization is a common place for clients to find a civil plaintiff and criminal defense trial lawyers in their state and around the country.

In order to achieve this status, Philip underwent a multi-phase selection process and was ultimately asked to join this “invitation only” organization. All members are re-evaluated every year to ensure that only the most qualified are granted membership in the organization. END_OF_DOCUMENT_TOKEN_TO_BE_REPLACED

April showers bring May flowers: spring is in full swing and that means lots of green, everywhere.  DeSoto County and regional officials are taking advantage of the season by planning and developing the environmentally friendly future of our region.

The officials are developing the Memphis Greenprint and Sustainability Plan and have been holding public meetings to gather feedback from residents about the best way to make the county even more sustainable. END_OF_DOCUMENT_TOKEN_TO_BE_REPLACED It’s finally crawfish season, the tastiest time of the year.  The spring and early summer months are a fun time to bring family and friends together for a feast, and to get your hands messy with some spicy crawfish and cold beer.

The second annual Heads-N-Tails Beer and Crawfish Festival is the perfect opportunity to do just that.  Held at the Snowden Grove Amphitheatre in Southaven, the festival will feature live music, lots of food, and over 100 craft beers.

Held as a benefit for the Tunica Humane Society and the Stovall’s Sacrifice for Soldiers, the event will be a great way to mingle and celebrate the season with family, friends, and the rest of the community — all for a good cause.  END_OF_DOCUMENT_TOKEN_TO_BE_REPLACED The festival will be open for all from Tuesday April 22nd through Saturday April 26th.  Tuesday, Wednesday and Thursday, the festival goes from 4:00pm – 10:00pm. On Friday and Saturday, the festival extended hours to allow even more opportunity to enjoy yourself and your community. END_OF_DOCUMENT_TOKEN_TO_BE_REPLACED

The festival will be open for all from Tuesday April 22nd through Saturday April 26th.  Tuesday, Wednesday and Thursday, the festival goes from 4:00pm – 10:00pm. On Friday and Saturday, the festival extended hours to allow even more opportunity to enjoy yourself and your community. END_OF_DOCUMENT_TOKEN_TO_BE_REPLACED Sommore, along with other African American female comedians, was a star on The Queens of Comedy tour which was aired on Showtime.  Bill Bellamy is a well-known stand-up comedian who is credited with coining the phrase “booty call.” END_OF_DOCUMENT_TOKEN_TO_BE_REPLACED

According to the latest reports on criminal activity for the 2013 calendar year in Southaven, homicides and violent crimes have gone down but commercial burglary almost doubled.

For commercial, or business, burglaries, 43 reports were taken in 2013 compared to only 26 in 2012.  This is where the largest discrepancy lies. END_OF_DOCUMENT_TOKEN_TO_BE_REPLACED